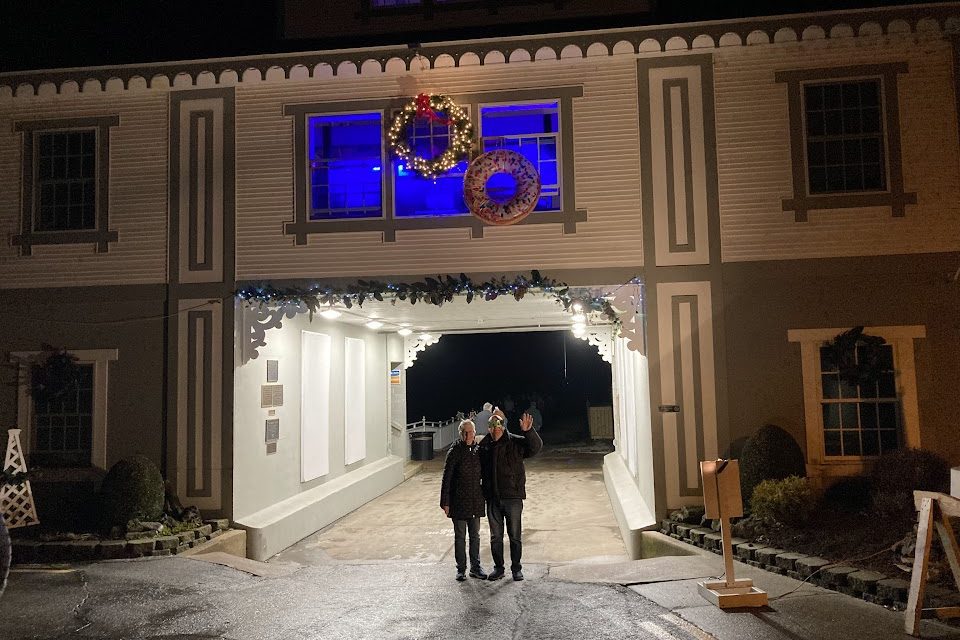 It started out as a joke, but what Ron and Carol Rinehart did on New Year’s Eve a couple years ago is becoming a Lakeside tradition.

The Rineharts, along with friends Scott and Babs Wilson, frequently attended Port Clinton’s Walleye Drop to celebrate the new year. They always enjoyed it but didn’t feel comfortable driving after the event was over. So, to ring in 2020, the Rineharts had an idea to bring the celebration closer to home. It required a fishing pole … and a bag of donuts.

“We asked the Wilsons if they wanted to go to Port Clinton or drop some donuts off the dock,” Carol said. “So, the first year of the Donut Drop was a bag of donuts on a fishing pole, and we just laughed so hard about that.”

Word of their clever idea started to spread around Lakeside, so the Rineharts anticipated it being a new event that would bring people to the community at a time when the streets were mostly empty. They thought it could be a great family-friendl 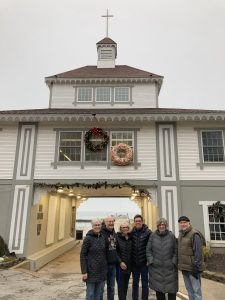 After a one-year delay due to the COVID-19 pandemic, the first “official” Lakeside New Year’s Eve Donut Drop to celebrate the beginning of 2022 was a big success. The weather was perfect to drop the inflatable donut from an overhead window at the Pavilion.

The donut became a popular photo op as many lined up to get their picture taken with Lakeside’s newest prop. Many danced throughout the evening as DJ Sean Gill played a variety of music and led the countdown to the new year.

The Religious Life Pillar sponsored the event, and Lakeside’s Senior Director of Religious Life & Pastoral Care the Rev. Dr. Charles Yoost gave a blessing for the new year. Coffee, hot chocolate and, of course, donuts were available after the drop, with The Patio Restaurant making a large donation toward the midnight snack. Attendance far exceeded expectations, with an estimated 250-300 people joining in on the fun.

“We thought there might be like 50 people there, and they just kept coming and coming,” Carol said. “We ordered six dozen donuts thinking that would be more than enough, but we had to split them in half.”

When they aren’t at Lakeside, the Rineharts reside in Akron. They visit often during the off-season and both work at Lakeside all summer. Ron works at the shuffleboard courts, and Carol is part of Loretta Wilken’s Grounds Crew

“I love gardening and working with Loretta,” Carol said. “It’s such a rewarding job because other people can enjoy it. She’s a great boss and wonderful to work for. Ron and I are also big shuffleboard players.”

Spending a lot of time in Lakeside gives them an opportunity to plan for the Donut Drop. It takes a couple months to get everything in place and make sure there is enough help. Gill is again booked to be the DJ and 12 dozen donuts have already been ordered. If you’d like to stay overnight, standard rooms can be booked at the Fountain Inn at a special rate of $89 (+tax) for Saturday, Dec. 31. To make your reservation, call 419-798-4461, ext. 230.

Carol is hoping the weather cooperates and that even more people come and celebrate the New Year in Lakeside, not just this year, but for many more.

“We’re hoping this becomes a tradition in Lakeside,” Carol said. “We’re really excited and looking forward to it.”