Major General John L. Borling (retired United States Air Force) is a man who never gives up. Throughout his life, Borling has demonstrated 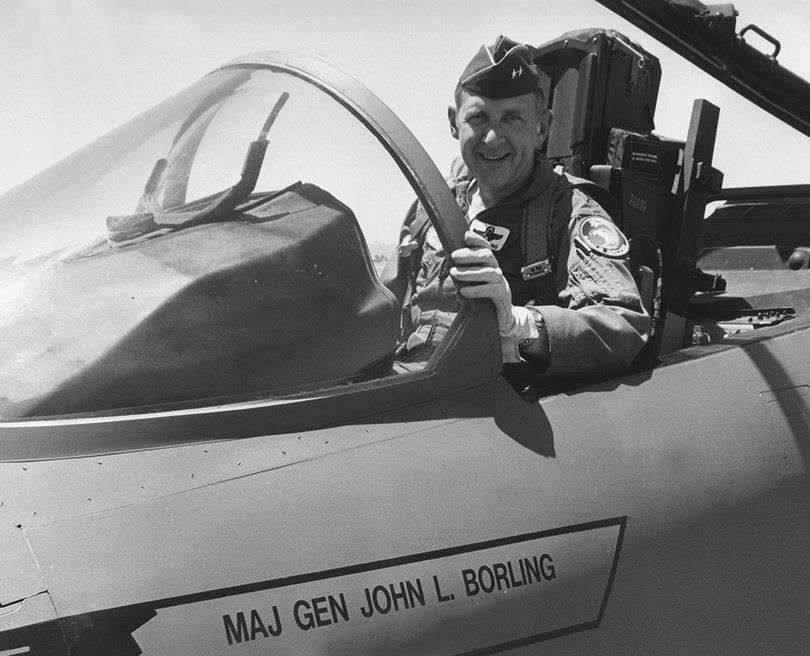 exceptional resilience and strength and will share his life experiences with Lakesiders at 10:30 a.m. Wednesday, July 17 and Thursday, July 18 in Orchestra Hall as part of this week’s Chautauqua Lecture Series.

[Lakesiders Dr. James and Betty Jane Young met and became friends with Borling after James and Borling met as colonels in Germany.]

As a fighter pilot in the Vietnam War, Borling flew 96 fighter missions and was close to finishing his 100-mission tour, a practically unheard of achievement. However, Borling didn’t want to stop there.

“He called his wife, Myrna, and told her when he was done with his tour he wanted to do 100 more missions,” said Betty Jane.

However, Borling never got the chance. On his 97th mission, he was shot down and taken as a Prisoner of War (POW) at Hanoi Hilton in North Vietnam. Borling and other POWs used the tap code to communicate, commiserating, encouraging and joking with one another in an attempt to maintain their sanity in the grim conditions. During these dark times, Borling also used the tap system to express his poetry.

Borling spent over six and half grueling years as a prisoner before eventually being released on February 12, 1973. One of the first things he did upon his release was acquire a tape recorder so he could record his poems.

“John is a brilliant man. The fact that he was able to remember all of these poems is a testament to his intelligence and ingenuity,” said James. “The fact that he later became a White House Fellow, Chief of Staff at the North Atlantic Treaty Organization (NATO) and a successful businessman are a few other testaments.”

Borling’s poetry reveals his genuine, personal experiences as a fighter pilot, POW and family man. Poems about his passion for flying, the loneliness and isolation as a POW, and the love for his family illuminate humanity’s capacity to be courageous, determined and resilient amidst tremendous pain and strife.

“They remain pieces of my soul,” Borling writes in his book, Taps on the Walls: Poems from the Hanoi Hilton. “I hope they become pieces of yours.”

History of the Steele Memorial Bandstand/Gazebo Make Your Garden the Talk of the Neighborhood