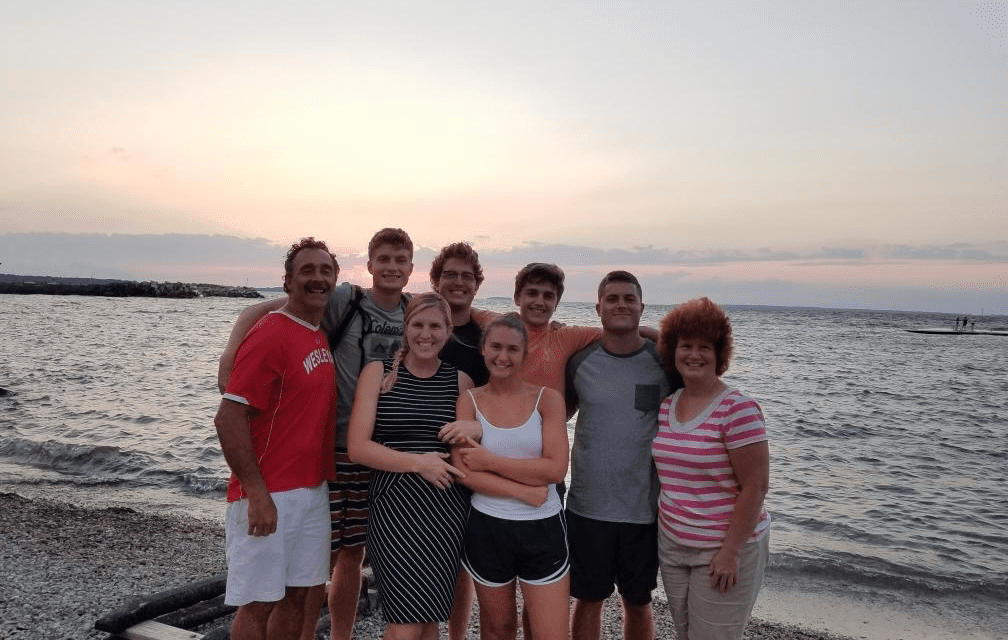 Phil Frentsos stands out when walking around Lakeside. After all, the former college basketball player is 6 feet, 6 inches tall.

Phil is a lifelong Lakesider from Delaware, Ohio, who joined the Advancement & Marketing Team in September. Since his family is well-established in Lakeside, he says the transition has been a smooth one.

“I know a lot of people in the community,” Phil said. “I have enjoyed meeting new Lakesiders and learning more about their passions for this special place.”

As the Advancement Assistant, Phil assists the team in processing donations, talking with donors and developing relationships within the Lakeside community. The position became vacant when Leslie Krasniewski transferred to a Human Resource Manager position at the start of the summer.

Phil has three brothers and two sisters and all have been coming to Lakeside before they could crawl. The family would spend about one week a month during the Chautauqua season at the campground, and the dock was one of their favorite places. In addition to fishing, when the kids got older, it was a family tradition for everybody to jump off the dock at least once a summer. The Hubbard Pickleball Center became a popular spot for Phil and his brothers and he said at times “things got competitive.” He also enjoyed grabbing a Patio donut after getting up to watch the sunrise.

“We came to Lakeside every summer and we’ve spent a lot of time here,” Phil said. “We’ve seen this place evolve and change and it’s been awesome. I have a lot of great memories here, but none of them stand out because your entire time here is so memorable.”

Phil held jobs at Lakeside in previous seasons. He was a housekeeper at Hotel Lakeside in the summers of 2012-13. In 2019, he was a Recreation Intern and lifeguard at the Grindley Aquatic & Wellness Campus pool. As an intern, his team planned the 5K Raccoon Run, oversaw lifeguard scheduling and provided additional support in the Recreation Department. He also led a basketball camp in Bettinger Park. In addition, he stayed busy in the evenings scooping gelato at Ooh La La.

“I was working the entire day within Lakeside all summer, and it was fun,” Phil said.

Athletics is prominent in the Frentsos family. His father, Fody, was inducted into the Ohio Wesleyan Athletics Hall of Fame in 1990. During his career, Fody earned a combined nine letters in baseball, basketball and football. He went on to serve as an assistant to the baseball and football coaching staffs at Ohio Wesleyan University. Phil’s brothers, Zach and Seth, both played baseball for the Battling Bishops, as well.

Phil’s route to college athletics hit a bit of a roadblock. He was cut from the Rutherford B. Hayes High School varsity basketball team as a junior because he was, as he puts it, “too short.” Entering his senior season, not only did he Phil work on his game, but he had an unexpected growth spurt, going from 5-10 to 6-4.

“That was a weird summer,” Phil said. “I had a massive growth spurt, so the coach basically said ‘OK, you can play now.’”

Phil quickly garnered interest from Division III schools like Wooster, but he decided to attend Fork Union Military Academy, a private, all-male college preparatory boarding school in central Virginia. He continued to develop his game, grew two more inches, gained a couple pounds and added some muscle. He impressed several college coaches and decided that playing for Ashland University’s John Ellenwood was the best fit and accepted his scholarship offer.

Phil earned his degree in Supply Chain Management and Logistics while having a great career on the basketball team at Ashland. The Eagles compiled an impressive four-year record of 87-33 during his time there. His career high is 23 points in a win over Purdue Northwest during his senior season, but he says playing defense was his specialty.

“I wasn’t known as a scorer, and I was needed in different ways,” Phil said. “We had some amazing teams and we had so many great players go through there. It was fun, and I wouldn’t trade it for any other experience.”

Phil played in every game from the start of his freshman season to the final game of his senior year, a close loss to Southern Indiana in the first round of the 2019 Division II NCAA Tournament. He held the school record for most games played, but that was broken at the end of the 2022 season. Due to COVID-19, the NCAA granted an extra year of eligibility for athletes, so a fifth season by former teammate Aaron Thompson put him at the top of the list. Even though Phil no longer holds the record, he has a sense of humor about it.

“He got an extra season, so I think his record should have an asterisk,” Phil said with a chuckle.

After graduation, it was time for Phil to start his professional career. His first job was in the supply chain department at Sanford Medical Center in Fargo, North Dakota. He admits the timing wasn’t all that great since he was hired just as the pandemic was beginning and said working in a medical facility was “madness.” Phil had a good experience, but it wasn’t something he wanted to do long term.

Ready to be closer to home and away from frigid winters, Phil moved back to Ohio, thinking he could find a similar job near his family. Lakeside turned out to be the perfect fit for him. Fortunately, his family bought a place just outside Lakeside’s gates a couple years ago.

“My family lives two hours south, and Lakeside is awesome,” Phil said. “I’m glad I’m working here because I feel like I’m giving back to the community where I grew up, and it’s really rewarding. I already have a great relationships here, and Lakeside has always been like a sanctuary for me.”

Linda Goff is valuable asset behind the scenes 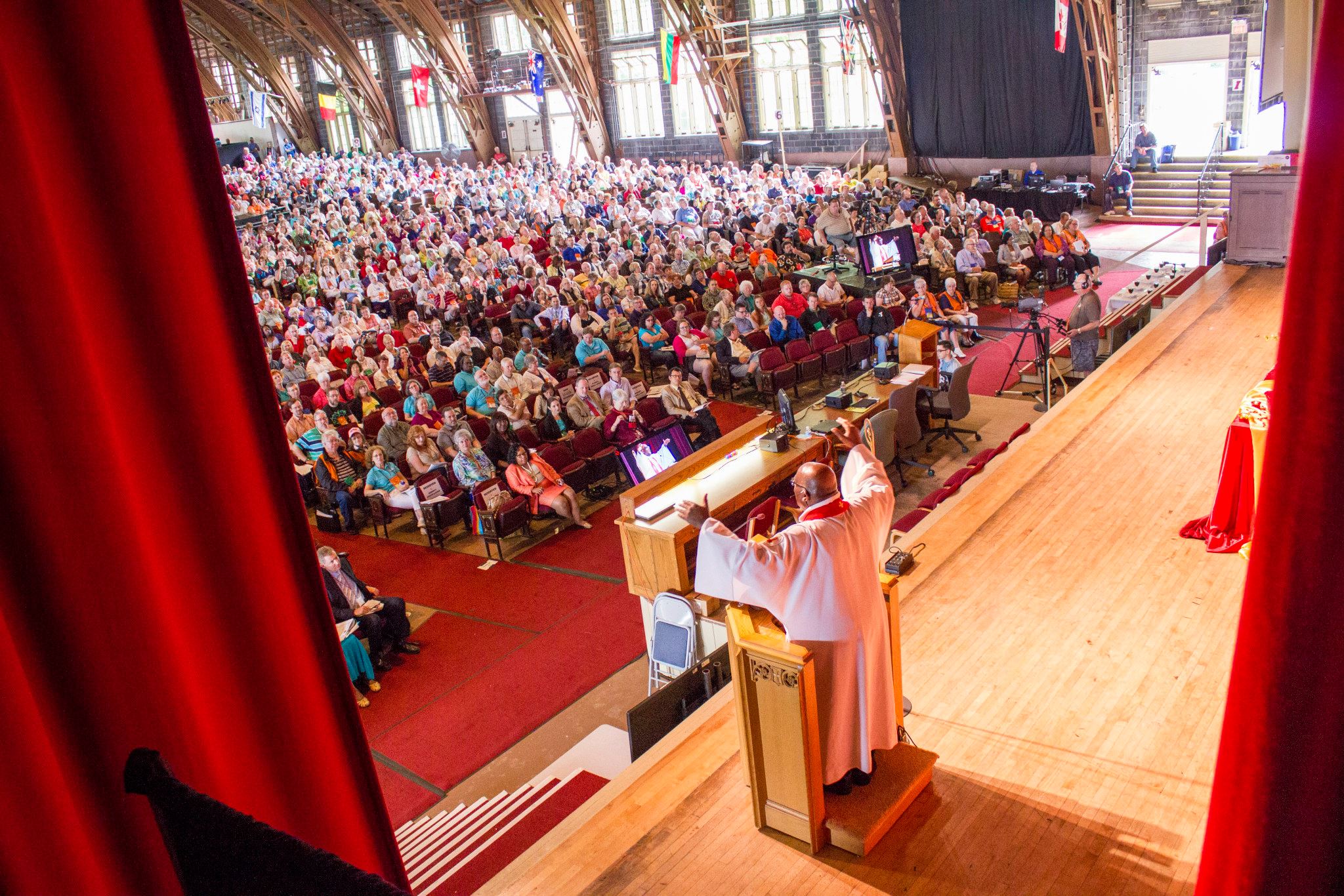 Religion Pillar back to full schedule 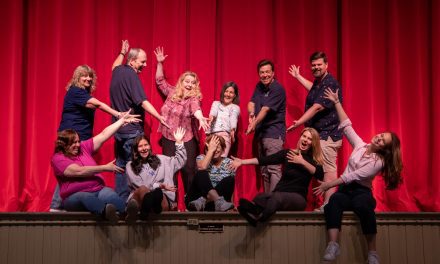 Hoover shows are back