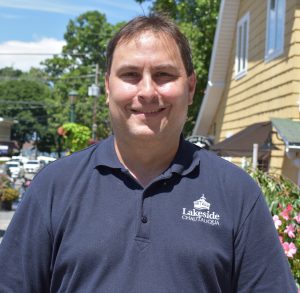 I just spent my first summer at Lakeside. Many of you are probably asking, “What took so long?” Funny, I’m asking myself the same thing.

Before I go further, as the Mike Myers character Austin Powers said in “Austin Powers: International Man of Mystery” (by far the best movie of that trilogy), “Allow myself to introduce … myself.” As you see in the byline, I’m Kevin Greer, and I became the Lakeside Communications Manager in February. I have a wonderful wife who I’ve been married to for 26 years. That means she has far exceeded her qualifications for sainthood. We have a son (age 22), daughter (17) and a dog (approximately age 9 – he was a rescue).

My wife and I grew up in once-thriving small coal towns about 15 minutes apart in Western Pennsylvania, near Altoona and Johnstown. Yes, we’re fans of Pittsburgh pro sports teams, even the lowly Pirates, but we don’t have the “yinzer” accent. I received my bachelor’s degree in journalism from West Virginia University. Let’s gooooooo Mountaineers!

We moved to the area after living in the Eastern Panhandle of West Virginia (not far from Baltimore and Washington, D.C.) for 16 years. I took a job as lead designer at the Sandusky Register in January 2020, just before the pandemic hit. But after working at newspapers for 25 years, moving on was long overdue. Getting home at midnight or later, not seeing my family, being stuck in a lousy sleep pattern, and working in a declining industry equaled it was time for a change. I wanted to do something similar, but different and not at night. I know, good luck with that, buddy!

While scrolling through one of the job websites, I happened to stumble onto a job opening at this place called Lakeside. We didn’t visit the Marblehead Peninsula all that much, even though it was a short drive across the bay. However, we did like the area. It’s very scenic and, as the kids like to say, “it has a good vibe.” We never went to Lakeside because we weren’t exactly sure how to get there. We drove past the South Gate entrance a few times and all we saw was a parking lot, so we never made the left turn.

Anyway, back to the job thing. I initially applied for the Digital Media Coordinator position. I don’t use social media that much, but I figured if pretty much every kid knows how to use it, how hard could it be for an old man like me to figure it out? Before applying, my wife and I decided to take a ride to Lakeside to see what the place looked like. It was a chilly Saturday in November, so we drove through the gates and looked to see if anybody was in the booth. We didn’t know how the whole gate thing worked until we saw the sign that says when you need to pay. Even though most of the businesses were closed and the trees had no leaves, my wife said to me, “Yeah, I think you should apply for the job.” The pictures we saw on the website didn’t lie – it’s a beautiful place, like what you would see in a Hallmark Channel movie. I don’t watch that channel, I was just believing what my wife was telling me.

Well, I didn’t get the job. Good thing, because the person who did (Bridget Sowers) is far better at it than I would’ve been. Oh, and her job isn’t that easy. But during the interview, I was told there might be an opening soon for such things as writing, editing and newspaper design. I’m familiar with all those things. All my writing experience was in sports, but I knew I could adjust. To top it off, it was a day job. Hey, this checks all the boxes! So, when Lakeside asked if I’d be interested, I said “yes” without hesitating.

Lakeside called back a couple weeks later and let me know the job opened, so with our Christmas tree as a backdrop, I did a virtual interview. I was hoping Santa would put a job offer in my stocking, but that didn’t happen. The Christmas decorations were put away, so I thought maybe they decided to hire somebody else. Around mid-January, Lakeside called for a second interview. After talking with COO Charles Allen, I got a brief tour of the offices on both sides of Walnut Plaza, met a few employees and left Lakeside feeling pretty good.

About two hours later, my cellphone rings with a call from Lakeside. Well, this is it. Offer or rejection? Take a deep breath and answer the phone. The job was offered to me, but I didn’t accept it right away. My wife and I are a team, so we talked about it … for about a minute or two. I called back and told them I was in.

One of my main tasks was to revive the blog. Since 2004, I had been doing mostly newspaper designing. I did a little bit of writing, like previewing a couple NCAA Basketball Tournament teams, but it wasn’t my main job at my last three stops. I did a lot of writing during my years as a sports editor and I missed doing it, so I was looking forward to getting back to that part. The first idea given to me? How Becky Donithan protects butterflies in Lakeside. From baseball high flies to butterflies? The transition wasn’t bad at all. I learned a lot from her, and the first non-sports feature story of my career that has spanned 20+ years was fun to write. Donithan was a pleasure to interview.

I got to post articles and photos on Lakeside’s website and blog, as well as design and schedule events for the digital billboard. Those were new things for me, which is a good thing. After all, I said I wanted to do something different. I also got some other story ideas put on my plate, but I had one of my own. Who is this Chip Richter guy? Everybody speaks so highly of him around here. So, when I brought it up to Gretchen Colon and Alex Stelzer, who both joined the Marketing Team in the spring, they thought I should send him an email. To no one’s surprise, Richter agreed to an interview. A few weeks prior to the season, we spoke virtually – I was in my Legacy House office, and he was in his recording studio. It lasted nearly 75 minutes, but there was never a dull moment. Everything he said had importance and relevance. He has this incredible passion and love for Lakeside. You can see it on his face and hear it in his voice. He’s an entertainer, but he wasn’t acting. He gave a lot of perspective of how great Lakeside is and I found out he was spot on.

When the season started, I wrote a couple more articles and was in charge of laying out the Lakesider newspaper. As you might have noticed, there were design changes. I thought I could make it better, and I was trusted by those who hired me to do that. I’m not a perfect designer, but I hope you liked what you saw. A lot of work goes into the Lakesider, but it’s a team effort. I had a lot of help, especially in the first couple editions. My co-workers (Hannah Brainard, Colon, Sowers and Stelzer) have experience working here during the summer and have a good idea what’s important and what Lakesiders expect to see when they grab the newspaper.

My first summer in Lakeside was busy, hectic and special. Our team decorated a truck and was part of the July 4 Parade. I couldn’t believe how many people were on the Second Street parade route. It was definitely a fun memory. Oh, and we ran out of candy before we got to Central Ave. The fact that I work with a lot of good people made my career move much easier. I met many friendly Lakesiders and look forward to meeting more. A lot of people visit here during the summer, and it’s a peaceful, family-oriented place with so many things to do.

Since I spent most of the time in my office, I didn’t get to take advantage of all Lakeside has to offer. I worked on the schedule pages in the Lakesider every week, so I’m well aware this place has plenty to do. I will eventually jump in the pool, play mini golf and shoot some basketball. My wife and I want to learn how to play shuffleboard and pickleball. There are other things, but the list is too long. When it wasn’t too hot, I took in Lakeside’s beauty by taking a 25-30-minute walk during lunch. I experienced the view along Ohio’s Most Beautiful Mile several times and it never gets old.